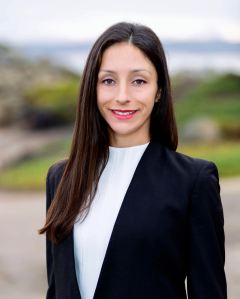 Melissa Ault Ricci’s passion for service is seen through her lifelong support of community organizations and her time as a paralegal in United States Army. Melissa currently serves on United Nations Association, Monterey Bay Board of Directors. She previously served on the YWCA Monterey County Board of Directors, is an avid supporter of Monterey Museum of Art and Rancho Cielo Youth Campus, and both worked and volunteered for the Mandell Gisnet Center for Conflict Management and the Monterey County Superior Courts as a mediator and conflict consultant. She holds a Jurist Doctorate from Monterey College of Law, an Executive Certificate in Negotiations, a Mediation Certification, and an undergraduate degree in Legal Studies and Literature, with a focus on Women’s Literature.

Rebecca Cafiero grew up in a small town with dreams to make a big impact. When having it all as a successful corporate executive didn’t lead her to happiness, she changed her perspective, her career, and her life. This change inspired her to marry her extensive executive background with her passion for healthy living and assisting others, leading to the creation of her Elevate Your Life Project. This project is a platform that empowers people to lead their healthiest, happiest, and most abundant lives. Now, as a lifestyle expert, speaker, and writer, she utilizes her passion in her career to change people’s way of living.

Maria Giannini is the former Vice President and current senior producer of e2k Sports. She has had the opportunity to travel the world and work with clients such as the National Football League, the National Basketball Association, Microsoft, Sony, Marvel Films, and Pixar. Maria also served as the Executive Director for the San Diego Charger Girls for nearly 15 years. Now, she is very active in her community, working with several local non-profit groups, like The Boys and Girls Club and the Junior League of Monterey County. Maria is passionate about dual language immersion in education and is a founding member of Dual Language Program Advocates. Maria currently resides in Salinas, California with her husband, Dirk Giannini, and their two daughters.

Ron Johnson, a native to the Monterey Peninsula, is the Associate Vice President for Boys & Girls Club of Monterey County. A former wide-receiver for the Seattle Seahawks, three-time Eastern All-Star while with the Hamilton Tiger-Cats, and a five season player for the Philadelphia Eagles, Mr. Johnson retired from professional football in 1990 to pursue his true passion: working with youth. Mr. Johnson, along with former Philadelphia Eagles teammate Anthony Toney, created the Johnson-Toney Football Camp in conjunction with the Boys and Girls Club of Monterey County not only to teach youths about football, but to introduce positive and basic characteristics essential to life: gratefulness, self-control, loyalty, honor, responsibility, truthfulness, and integrity. Mr. Johnson currently lives in Monterey with his wife Lynn, and their two sons. 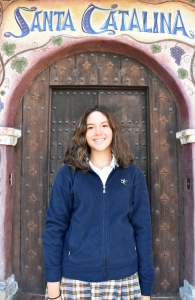 Ana Leon Nuñez is in her senior year at Santa Catalina School. She was born in Mexico City and moved from Acapulco, Guerrero to Monterey, California when she was 14 years old. She was raised in a Spanish-speaking household and has had to adapt to living in a different country, which has defined her character. She is currently applying to college in the United States and looks forward to studying theatre and political science.